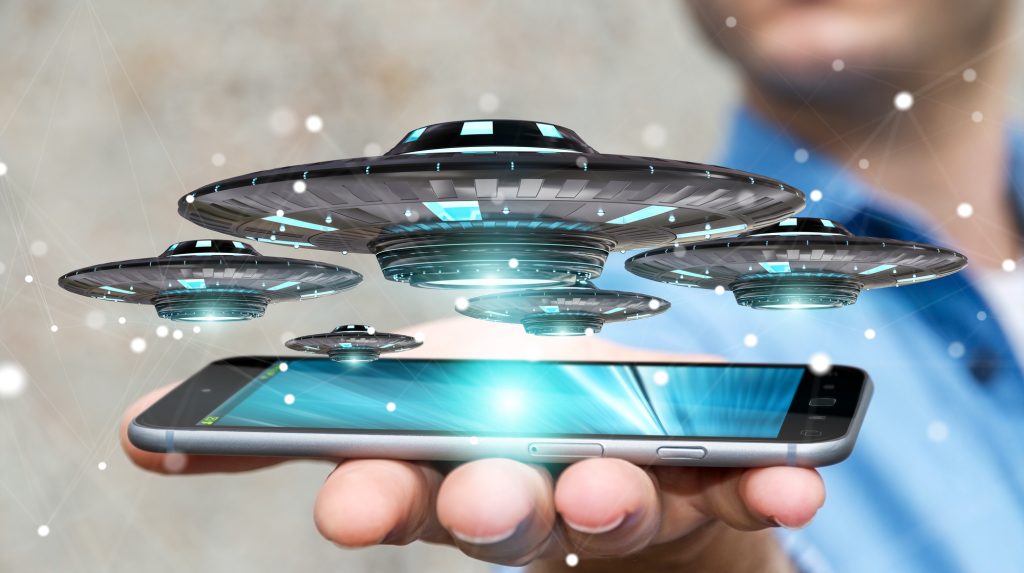 In this article I’ll be reviewing the most recent NPA overlay announcement from the North American Numbering Plan Administration (NANPA) and more generally, I’ll be discussing what it means if an NPA overlay is announced within your state – what will happen, and what does an affected telco need to do about it?

A couple of weeks ago the North American Numbering Plan Administration (NANPA) announced that they will soon be adding a new area code 341, and that this new NPA will overlay the 510 NPA that covers Alameda (where I live), Oakland and a few other cities in the East Bay. I have to assume that there are so many people living in Alameda County that we’re in danger of running out of phone numbers in the 510 number block, and so NANPA want to provide phone numbers to cope with the population growth.

[As an aside, some simple math tells me that between 510-200-0000 and 510-999-9999 there are approximately 8 million numbers available (it’s not quite that simple I realize), which seems like it should be plenty considering that the combined populations of Alameda County and Contra Costa County (per Wikipedia) are around 2.8M people (as of 2015) – and since the 510 area code doesn’t even cover the entirety of the two counties. However obviously many people have more than one number (home, work, cell), and then there is some inefficiency in usage, since many businesses will own a block of numbers and then maybe not use them all.]

In any case, NANPA is projecting that there’s a risk of running short of numbers, and so they’ve planned an NPA overlay. This isn’t a particularly unusual event – NANPA usually adds a handful of new NPAs every year as the demand for phone numbers in an area grows – but I thought I’d take this opportunity to dig deeper into NPA splits and overlays for those of you who haven’t experienced one first hand (and perhaps may be affected by one in the future).

The first time I came across the idea of the expanding numbering plan was in 2007 when the the authorities decided to split the 505 NPA (which had previously covered all of New Mexico) and refocus those numbers on the the big cities and the north-western part of the state, and create a new 575 NPA that would be used everywhere else. 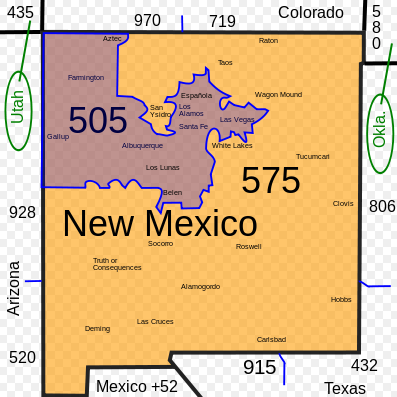 An NPA split is a whole different kettle-of-fish from the overlay proposed in California. On the positive side it leaves you with a pretty map (as above) where different areas have different NPAs, and it’s possible to continue with 7D local dialing within your local calling area. However, the migration process is pretty painful – requiring millions of individuals and businesses to change their phone numbers (imagine all those new signs, business cards and brochures), and there’s a period where every telephone service provider needs to allow subscribers to be dialed with two different numbers, which isn’t easy to pull off.

Back in the day, NANPA obviously thought the benefits outweighed the costs, but these days (given the prevalence of cell phones, where people are used to 10 digit dialing, and which aren’t tied to a geographic location anyway) NPA overlays are the standard way of doing things. In fact that 2007 NPA split in New Mexico was the last split to be performed in North America (per https://en.wikipedia.org/wiki/Area_code_575).

An overlay is a bit different. You keep the NPA boundaries as they are, and everyone keeps their existing phone numbers, you just add another NPA over the top – so that an existing geographic area has twice as many phone numbers to play with, and there’s no geographic distinction between (in this case) the 510 area code and the new 341 area code.

Is this California NPA overlay the only one going on at the moment?

No. The 510/341 overlay is the most recently announced change, but NANPA typically announces several NPA expansions each year, and the process typically takes 12-24 months to play out. As a result, the following NPAs are currently somewhere in the midst of an overlay.

For some reason it seems like there’s a lot of activity going on in Canada at the moment – I’m not sure if they’re experiencing a population surge or if they just batched up all the changes.

How can I find out about upcoming changes?

If you’re directly affected I believe NANPA will notify you – otherwise you can sign up for notifications at https://nationalnanpa.com/contact_us/mailing_list.html.

How can I tell if a particular change impacts our company?

If you’re a local (class 5) service provider then different changes will impact you to different degrees.

Okay, I manage the switch for an affected telco, what should we do?

For the rest of this article we’re going to look at the impact for a CLEC or ILEC that has subscribers and local PSTN connectivity within an NPA that will experience an overlay. I’ll touch a couple of times on Metaswitch-specific configuration elements (for those who are running a Metaswitch CFS), but the principles of this discussion could apply to any service provider, whatever switch vendor you use.

We’ll use the phases described in the 510/341 NPA planning letter to aid our discussion. The details of your particular NPA overlay may be slightly different, but this should give you a good idea of what to expect.​​​​​​​

Starting December 15, 2018, subscribers within the 510 NPA need to be permitted (and, in fact, encouraged) to dial local calls as 1+10D. I’ll leave the “encouraged” part to customer communications and marketing departments, but in order to allow 1+10D dialing for local calls you need to update your translations. If you have a Metaswitch, you’ll need to find the attribute set that is used for local calls (perhaps creating a duplicate if you need to distinguish between local calls in the 510 NPA and other NPAs on your switch), and then modify the Allowed Dialing Pattern attribute to permit 1+10D dialing for local calls. You can obviously pre-build and pre-test this change, using an overriding config set, and then make it active for all subscribers at 12:01am PT on that day.

On June 22, 2019 dialing 1+10D for local calls becomes mandatory – so we need to make a further modification to translations to prevent 7D dialing. Just as the first change made dialing permissive, we are now undoing that change, to restrict dialing again, but this time only 1+10D dialing will be allowed. In a Metaswitch you would modify the same attribute set as before – for this NPA only – and remove 7D dialing as an Allowed Dialing Pattern.

When you test this change, make sure that your subscribers receive a helpful announcement if they try to dial with only 7 digits, as you can bet a bunch of people will be confused by this. (This should happen automatically in the Metaswitch.)

If you have TDM or MGCP subscriber lines you could consider modifying the digit maps so that the digits are not collected after the user dials a 7D call, but personally I’d leave the digit maps alone, as it’s better to accept the call and then give a useful announcement than to leave them confused with a long post-dial delay.

By July 22, 2019 it’s possible that the new NPA may be in use for some numbers, so your switch needs to be able to handle that. This will require a few changes ahead of that date.

Obviously this example has been specific to the 510/341 NPA overlay situation, but the same principles would apply for any NPA overlay announced by NANPA.

If you are affected by an upcoming NPA overlay, there’s no need to panic. NANPA usually provides plenty of time to prepare, so provided you plan early, make a plan for the various activities required in your network, and hit all the deadlines, you’ll be fine.

If you would feel more comfortable outsourcing the switch configuration updates to an expert (Metaswitches only), then as always, feel free to contact us and we would be happy to take care of it for you.